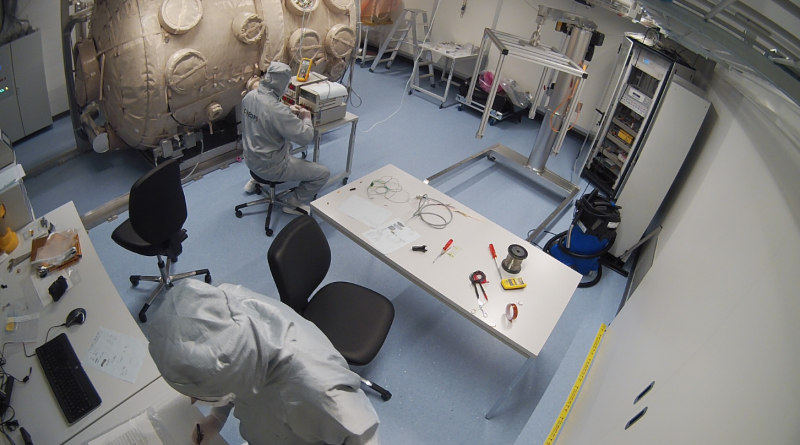 There are countless planets in neighboring solar systems about which almost nothing is known. They are outside the gravitational influence of our sun and orbiting other stars. For this reason, they are also called extrasolar planets – “exoplanets” for short. Today’s investigation methods may only provide information about planets in our own solar system, the characteristics of the planets in other systems however remained in the dark.

THE MISSION: The European Space Agency (ESA) has initiated the CHEOPS mission (CHaracterizing ExOPlanetSatellite) to provide insights of exoplanets. In close collaboration with a research institute in Switzerland, a unique optical telescope was designed and built. Weighing 300 kilograms, having an opening of 30-centimeter and a total length of 1.2 meters the telescope is one of a kind.

Using the “transit method” the telescope shall gather information about previously known exoplanets: Whenever a planet passes the front of its central star, its brightness decreases due to the shadow of the planet. This process is now observed by the telescope using the transit method. The decrease in brightness gives an idea about the diameter of the planet. With ground-based instruments and using the so-called “radial velocity method” – the mass of these planets can be determined. Knowing diameter and mass, the density can be calculated and this information in return allows interpreting whether the planet is made up of gas, ice or stone. CHEOPS is designed to collect plenty of important data of unknown planets in other solar systems.

The success of the CHEOPS mission depends on both a high precision and the reliably of the telescope. Large numbers of pre-testing and exact preparation are required.  Being earth based, these requirements can only be met by simulating space and realistic typical space conditions. A specifically designed vacuum chamber allows all kind of tests simulating the highly challenging ambient of the CHEOPS telescope.

The space simulation chamber has to fulfill highest requirements to prepare the telescope for its space mission:

The vacuum experts of our customer developed a 5.5-tonne calibration and vacuum chamber for the CHEOPS telescope. All specific requirements of the application were considered from the beginning. As a result all kind of tests and calibrating options for the telescope and its components under authenticable conditions could be realized.

Even before the actual delivery, the accurate chamber’s preparation had started: As it is essential that no optical reflection on the chamber walls may occur during the optical tests of the telescope components, the interior was coated with a special black paint. This color is also optimized to absorb any heat radiation of test objects. During testing in a vacuum, no chemical substance may escape from the interior of the chamber. For this reason, the vacuum specialists had pre-mounted the chamber completely before final delivery. The chamber was heated at a temperatures of +160 degrees Celsius for several weeks to enforce gassing out of the inner chamber surfaces.

After completion of this process, the chamber was dismantled and transported to the end user together with 3 HUBER temperature control units and the necessary vacuum accessories.

In the clean room laboratory of the research facility, the components of the telescope were exposed to temperatures between -80 ° C and +140 ° C in a vacuum. Later, the structural model and, finally, the actual flight instrument were tested in the chamber.

The telescope is positioned at an optical table, based in the center of the chamber.  A temperature-controlled “shroud” surrounds the entire test volume and shields the telescope from the walls of the vacuum chamber. Facing the test object, the shroud is painted in special black paint to provide minimized absorption and outgassing. The color itself “swallows” the thermal radiation of the specimen similar to space conditions.

The chamber can be heated up to +160 ° C with the help of a cleanroom-proof insulated heater. Both Unistats pump a special thermal fluid through channels in the interior and allow cooling down to -90 ° C. Due to the high-precision control technology of the Unistats®, the temperature of the thermal fluid can be controlled to within a few hundredths of a degree.

This vacuum chamber is the basis for next significant step in space exploration. It provides universal test equipment that can be used beyond the CHEOPS project for future satellite missions

CEO, Chairman @ Peter Huber Kältemaschinenbau AG. I am proud of running our family owned company as Managing Director and Chairman. HUBER is seen to be the technology leader for environmentally safe temperature control products from -125°C to 425°C. Our innovations are based on close communication and listening to customer needs. We have been recently recognized and awarded as the Top Innovator of the Year, Top Employer in Germany, Winner of the Grand Prix of German Mittelstand, the Environmental Price of Baden-Württemberg and we are listed in the Lexicon "Best of German Mittelstand". Love what I do. Find out more at: www.huber-online.com.